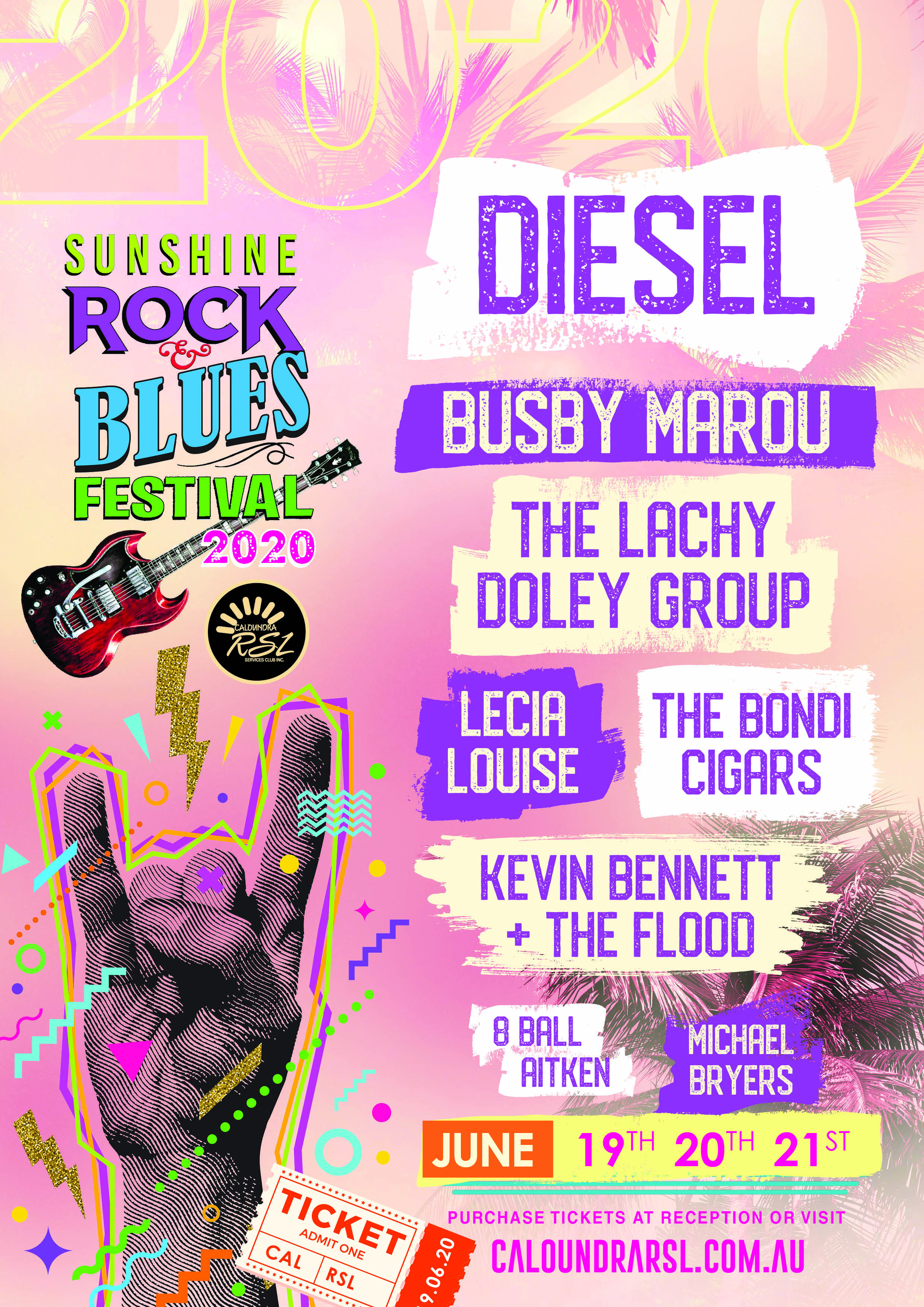 Returning with a huge line-up of Australian artists, the Sunshine Rock & Blues Festival presented by Caloundra RSL is back on the weekend of Friday 19th to Sunday 21st June 2020.  Being totally undercover, this all-weather event will go ahead rail, hail or shine.

In the Function Room, festival goers will be treated to a magical night of rock & blues, featuring some of Australia’s most loved musicians, starting with Kevin Bennett & The Flood.  Stories come alive through CMAA Gold Guitar winner and Aria nomineeKevin’s golden voice.  He writes contemporary Australian Blues and Rock music, telling stories of where he’s from and where he might be going.  His songs have been nominated for APRA Song of the Year and his album with The Flood, ‘The Ballad of KB’, has been named in the Top Twenty Australian Albums of all time.

Rarely has an Australian band received as much consistent and widespread acclaim from critics and music fans alike as The Bondi Cigars.  With nine albums under their belt and over 21 years of constant touring, this award winning quartet have well and truly worked their way into Australia’s musical heart.

Dubbed the Jimi Hendrix of the Hammond Organ, Lachy Doley is the most celebrated Blues Soul Rock organ player in the world today – who can pump, pamper and occasionally pound the most unbelievable sounds from a keyboard.  The Lachy Doley Group have a unique and refreshing blues sound, a power house trio consisting of Joel Burton on bass, Jackie Barnes on drums and Lachy on the hammond and whammy clavinet.

Known as Diesel, American born guitarist/singer Mark Lizotte was launched on to the Australian charts as the leader of Johnny Diesel and the Injectors some 30 years ago.  Following his unbelievable show at last year’s Festival and showcasing his new album, Diesel returns by popular demand as our Saturday night headline act.

On Sunday morning, we present our “Songwriters in The Round” acoustic breakfast performance.  With up close and personal seating surrounding the artists, this intimate session has been described as “The hottest show of the festival!”  Our breakfast hosts 8 Ball Aitken and Michael Bryers will be joined by Lecia Louise and Kevin Bennett, to talk about and perform their original songs, while guests enjoy breakfast.

We round off the festival weekend with a very special event – a free performance on our main stage by the Round Mountain Girls.  With an infectious bunch of Celtic country roots songs and a crazy bunch of characters in the band – welcome to the world of Round Mountain Girls, where none of the band members are actually girls…

Tickets start at just $49 and can be purchased in person at Caloundra RSL or on line.

For the full weekend line-up and to purchase tickets, go to www.caloundrarsl.com.au

If you would like more information about the Sunshine Rock & Blues Festival 2019, please contact Jenny Wilson on (07) 5438 5800 or email – jennyw@caloundrarsl.com.au.